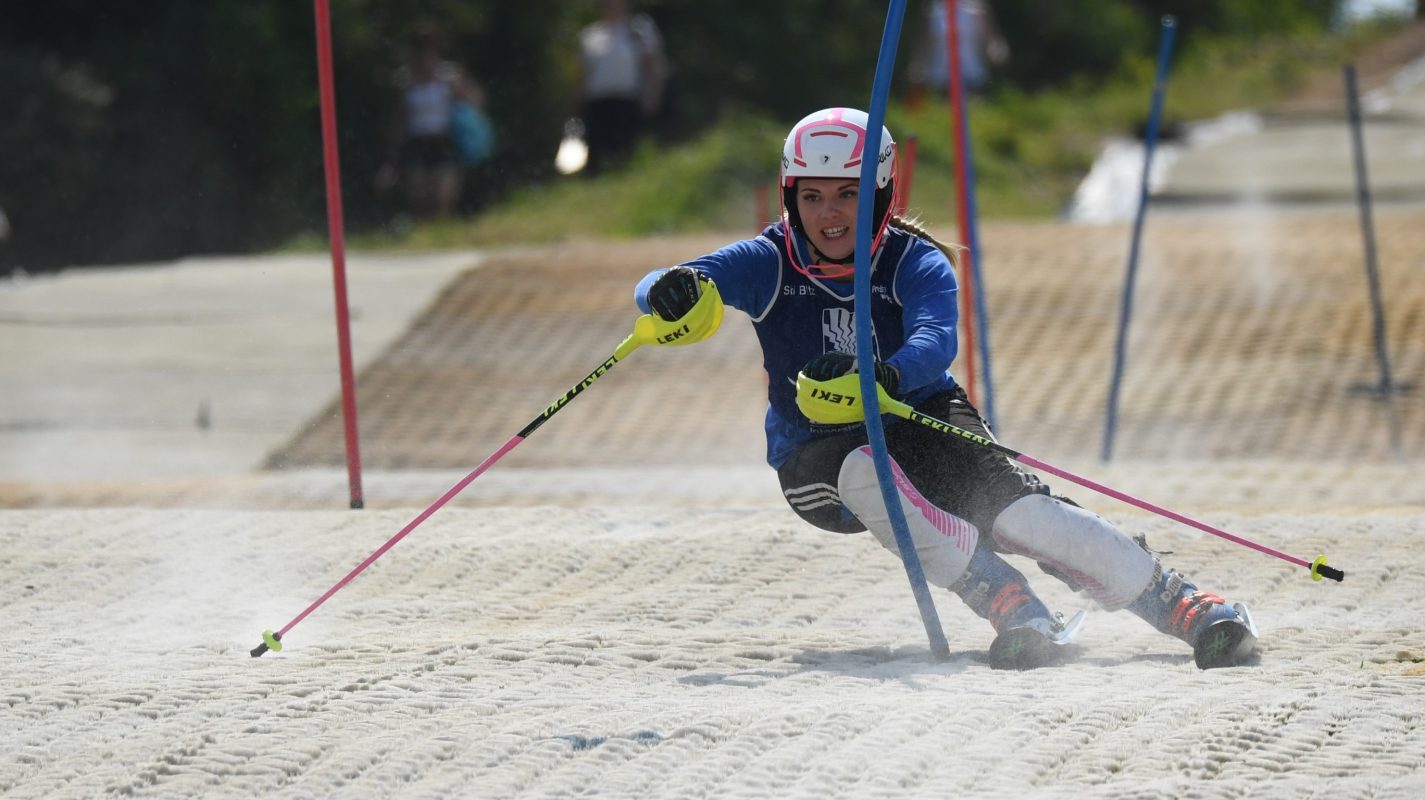 Saturday 29thJune saw the third BSA GBR race of the series which was held at Pontypool. As the long awaited warm British weather finally arrived in Britain, athletes were left wondering what made us decide to race in 28 degree heat!

There was an encouraging number of entries into the race, particularly females as there were the exact same number of them entered as the males! The first run on Saturday was set by Jordan Fellows, a former GB ski racer and current BSA Coach. It consisted of an open top section on the flat, a quick hairpin, a 4 mat delay on the ridge followed by a verticarli into a corridor to finish. The second course set was by Adam Lee. This involved a wider top section, a verticarli just before the ridge, a corridor into a hairpin followed by another corridor and combination with three gates to the finish line.

In the female race, Lauren Vale won overall with a combined time of 36.95, which was an impressive result and would have put her 4thin the Male standings. Nicole Shering, a fellow Aldershot teammate of Lauren’s, finished 2ndoverall with a combined time of 37.91 and Lauren Bloom, who trains regularly at Pontypool used this to her advantage, finishing 3rdfemale with a time of 39.47. Jolie Hoffman (39.99) and Eva Pascoe (40.76) completed the top 5 females, although there was only 0.56 of a second between 5thto 10thposition.

The male’s race was a little different to the females as a few of the pre-race favourites did not finish. Toby Case, Joshua Price and Ryan Bloom were amongst those who unfortunately made mistakes coming over the ridge. Thomas Upton from Midlands Ski Club had two quick runs to finish 1stoverall male with a combined time of 36.01. Oliver Weeks, who was 7thafter the first run, finished joint second with Jack Feneley who maintained his position after the first run. The both had a combined time of 36.35, 0.34 off first place. Charlie Tubbs and Josef Huppach both put down good performances to complete the top 5.

There were 4 under 10 females racing on Saturday. Isla Cameron finished in 1stplace with her fastest time being 23.52, which also positioned her 5thout of the under 10 and under 12 girls. Lowri Howie was 2nd,just 8 hundredths behind Isla (23.60), and Helena Rishton 3rd. In the under 10 boys, teammates Aaron Mcdonald and Lorcan Morrison came joint first with a fastest run time of 22.76 and 3rdplace in the category went to Xavier Poynton. In the female under 12 category, Alice Beverage finished in first place with an impressive second run time of 21.18, Kitty-Jay Caldwell came 2ndwith 21.72 and Grace Cameron 3rdwith 22.64. Podium positions were close in the male under 12 race with the top three being separated by 0.3 of a second. William Mitchell put down a great second run knocking off over three-quarters of a second from his first run to give him the win (21.21), Izaac Ellison finished 2nd(21.32) and Alex Mcdonald (21.47).

A big thankyou goes to Snowsport Wales who ran the race on Saturday, also to the officials who gave up their time to help in the glorious sunshine and BSA who sponsor the GBR series.