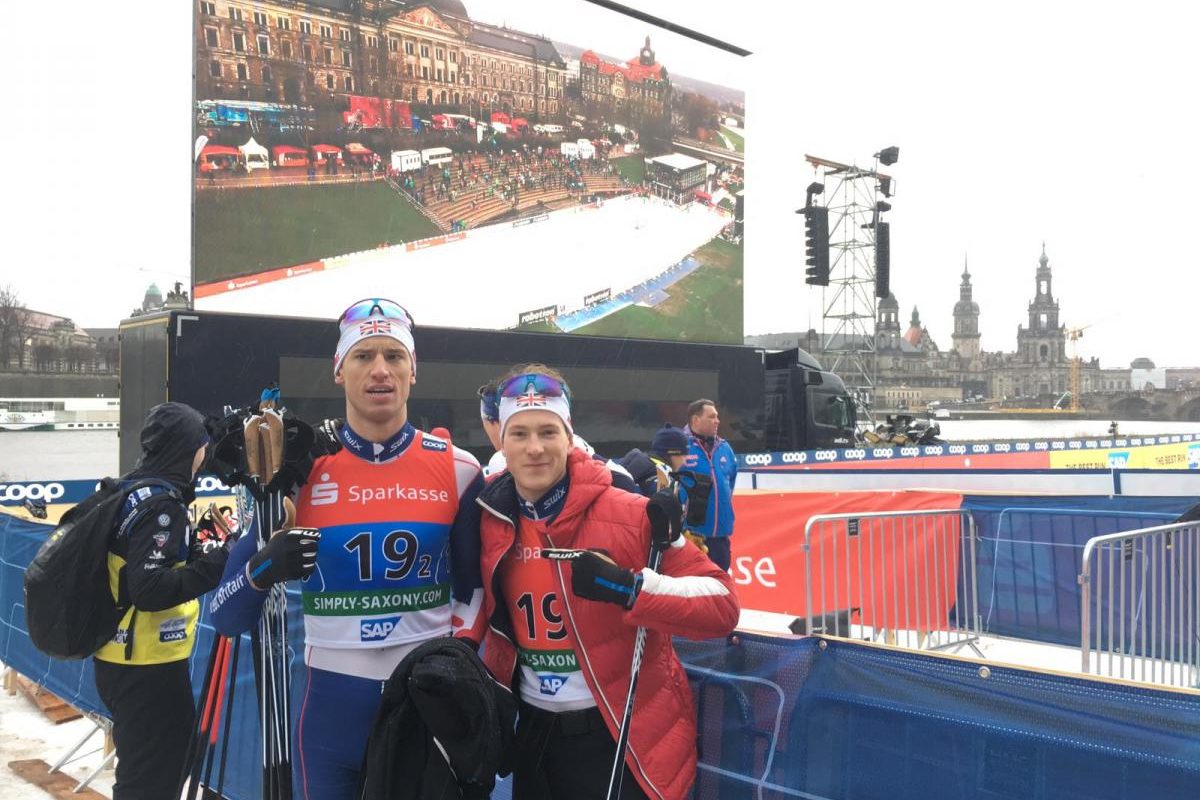 More than 30 British skiers and snowboarders were in action over the weekend and it was GB Cross Country leading the way with some historic World Cup results in Germany, while Charlotte Bankes continued her dominance in the snowboard cross Europa Cup.

GB Cross Country delivered a fantastic series of results over the weekend in Dresden where the sprint World Cup took place on the banks of the River Elbe.

In Saturday’s free skate sprint race, Andrew Young went one-better than 2018 when he qualified second in the prologue, while James Clugnet made it to the top 30 for the third straight race in 14th. Unfortunately both were unable to win through from their heats into the semi-finals with Clugnet edged out by just 0.05sec for the final lucky loser place.

Young eventually matched his result from last year in 13th while Clugnet was 23rd overall in his second-best individual World Cup result.

The following day’s team sprint brought much-anticipation in both the men’s and women’s races.

Annika Taylor and Nichole Bathe missed out on a place in the final, however in finishing 15th in the team sprint, they created history by earning Great Britain’s first-ever women’s World Cup Nations Cup points.

In the men’s race, Young and Clugnet were looking to improve on their ninth-place finish from last year with the first hurdle being to make it through the semi-finals. In the second and much-faster semi, the Brits stayed with the lead group throughout and held onto a top five place through the finish to earn a place in the final.

The pair were just as competitive in the final, with the top five teams only breaking away in the final stages to leave GB in sixth place, less than 2.5sec off the podium. The result was Britain’s highest-ever team sprint result at a World Cup, Clugnet’s best World Cup finish while Young has only finished higher once before when he stood on the sprint podium in Toblach in 2015.

The quartet from Dresden will compete at the Norwegian Cup in Nes next week before Andrew Musgrave rejoins the squad the following week for the World Cup in Sweden.

Snowboard cross star Charlotte Bankes has continued her fantastic form to start the season with a pair of Europa Cup victories in France.

After starting the season with a win in Austria, the 23-year-old backed up a World Cup podium with two more victories over the weekend to sit comfortably on top of the Europa Cup standings with three wins from four races.

Having previously competed in 16 Europa Cup races and never finished better than 17th, Maisie Potter showed her comeback from a heel injury is on track with two of her best ever results. In just her third race since almost a year on the sidelines, the 21-year-old finished 11th on Saturday before qualifying through to her first Europa Cup final and fourth place in Sunday race.

In the men’s races, Kyle Wise recorded his equal-second best career Europa Cup result with 24th on Sunday, while Chris Gregory’s best finish of the weekend was 41st in Saturday’s race.

While unable to progress through to the finals, Makayla finished 22nd in the women’s event and is currently ranked 17th on the World Cup standings. Thomas was 24th in the men’s event and presently sits 26th on the season.

Wil Willis was 41st in the men’s competition while brother Max recorded a DNF.

The Moguls World Cup tour heads to Lake Placid, USA next week before returning to Canada for the final pre-World Championships event in Tremblant.

It was an unhappy weekend for the trio of men’s alpine skiers who took to the World Cup in Adelboden, Switzerland.

Charlie Raposo (giant slalom), Dave Ryding and Laurie Taylor (both slalom) all recorded DNFs on a course which caused plenty of trouble for many of the world’s best.

Taylor will be hoping for a better outing tomorrow when he competes in the Europa Cup slalom in Reiteralm, Austria. Raposo will also contest a Europa Cup giant slalom this Thursday in Kronplatz, Italy alongside compatriots Iain Innes and Jack Gower.

Kronplatz is also the venue for tomorrow’s giant slalom World Cup where Alex Tilley will be flying the British flag. A lack of consistency has plagued the PyeongChang Olympian this season with a 21st place in Killington her best result so far.

Tilley has been less than three-quarters of a second outside the top 30 in the last two World Cups at Kronplatz and will have high hopes of qualifying for the second run this year.

Matt McCormick was the sole British snowboarder at the slopestyle World Cup in Kreischberg, Austria on Friday finishing the event in 28th place.

The 21-year-old had two good runs going but unfortunately fell at the last jump both times to slide out of contention for the semi-finals. He will be back in action on the course later this week for the Europa Cup, where his brother Chris will also be competing in the ski competition alongside Harris Booth.

Snowboard slopestyle World Cup kicks on again this week in Switzerland where the Laax Open will take place and GB Park+Pipe will be represented by Jamie Nicholls.

Nicholls has only competed in one slopestyle World Cup in the past 22 months and his last outing was at the Winter Olympics in February where he finished 16th overall.

Qualification in Laax takes place on Wednesday followed by semi-finals on Thursday before Friday’s final.

GB Para Nordic has recorded some fantastic results over the opening two days of the World Cup in Sweden.

In Saturday’s middle distance cross country races, Scott Meenagh was sixth in the men’s sitting category while Rachel Morris was ninth in the women’s.

The World Cup continues over the coming days in both biathlon and cross country. It is the final major event for the para nordic skiers ahead of next month’s World Championships in Canada.

A huge contingent from the GB Ski Cross squad was in Switzerland on Friday for the Europa Cup event in Villars.

Davies will head to the World Cup in Sweden this week while Sarsfield, Peters and Liz Stevenson head to Canada for a pair of Nor-Am Cup races. A further contingent of GB ski cross athletes will be in France for this week’s Europa Cup in Val Thorens.