Every single skier at this year’s English Alpine Championships was on piste thanks to a monumental effort from all involved in Bormio. There wasn’t a piece of powder left unturned across Stelvio and Stella Alpina – whether you were Nicole Ritchie in her ninth FIS season or an under-10 transfixed by sights and sounds. And once again the weather didn’t let anyone down, the week’s first clouds flitting into the skyline but failing to at any stage obscure a sublime scene. Appropriately, it was the best day of the Championships so far for Brits in FIS racing. 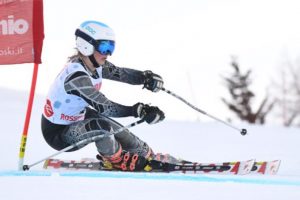 The ladies led the charge and there a heartening half of the top ten in the slalom on Stelvio was comprised of British athletes of varying valences. Sarah Woodward should take out a lease on the podium after medalling for the third day in a row – and but for 0.09s it could have been gold despite an excellent combined 1:43.50s. The Ambition star was closely followed by Scot Ritchie, returning to action after figuring in Sunday’s giant slalom in fourth and her compatriot Katie Stuart in seventh. Shannon Potter, 17, hasn’t stopped grinning all week and came ninth, while Lois Jackson is a growing authority at senior level and finished eighth for the second day in a row.

Zak Vinter remains without parallel in the men’s field and a first-run 47.58s formed the backbone of a second slalom gold in as many days. It must be said the French contingent have skied superbly over the last few days with Elliott Piccard and Thomas Lardon adding to their medal haul. Angus Wills continues to find vindication for his technical adjustments and he was the next best Brit in 11th, with Owen Vinter the foremost U18 thanks to his 49.70s first up. 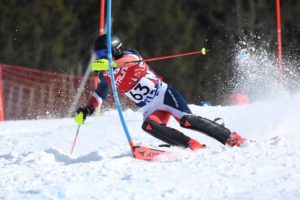 The ski lifts were groaning under the weight of hoards that made their way up to Stella Alpina for a packed day of racing across U10, U12, U14 and U16 age-groups. Sophie Foster appears a shoo-in for the overall U16 girls title and she sparkled to hold off Ambition team-mate Giselle Gorringe. And Ted Slade upgraded super-G bronze to GS gold thanks to a second-run charge, coming in at a mere 43.79s. There were a pair of races for the under-14s, Honor Bartlett blowing away the female field with 42.47s that was well over three seconds clear of her nearest rival Molly Butler, Anna Kamaly-Asl claiming the other.

Luca Carrick-Smith was given a run for his money in the second men’s race, Adam Radwan coming within 0.21s of getting gold after the BSA star cruised to victory in the opening rubber.‘Rocket’ Ryan Faber and Joshua Sundin once again went one-two in the 10’s combi and there was a Carrick-Smith double in the U12 with Freddy and Zak getting to keep the trophy.

Evolution’s Emily Magnani topped the podium in the sunshine in the 10’s, her combined 1:15.76s comfortably ahead of the pack and Isabel Nowell claimed 12’s glory.