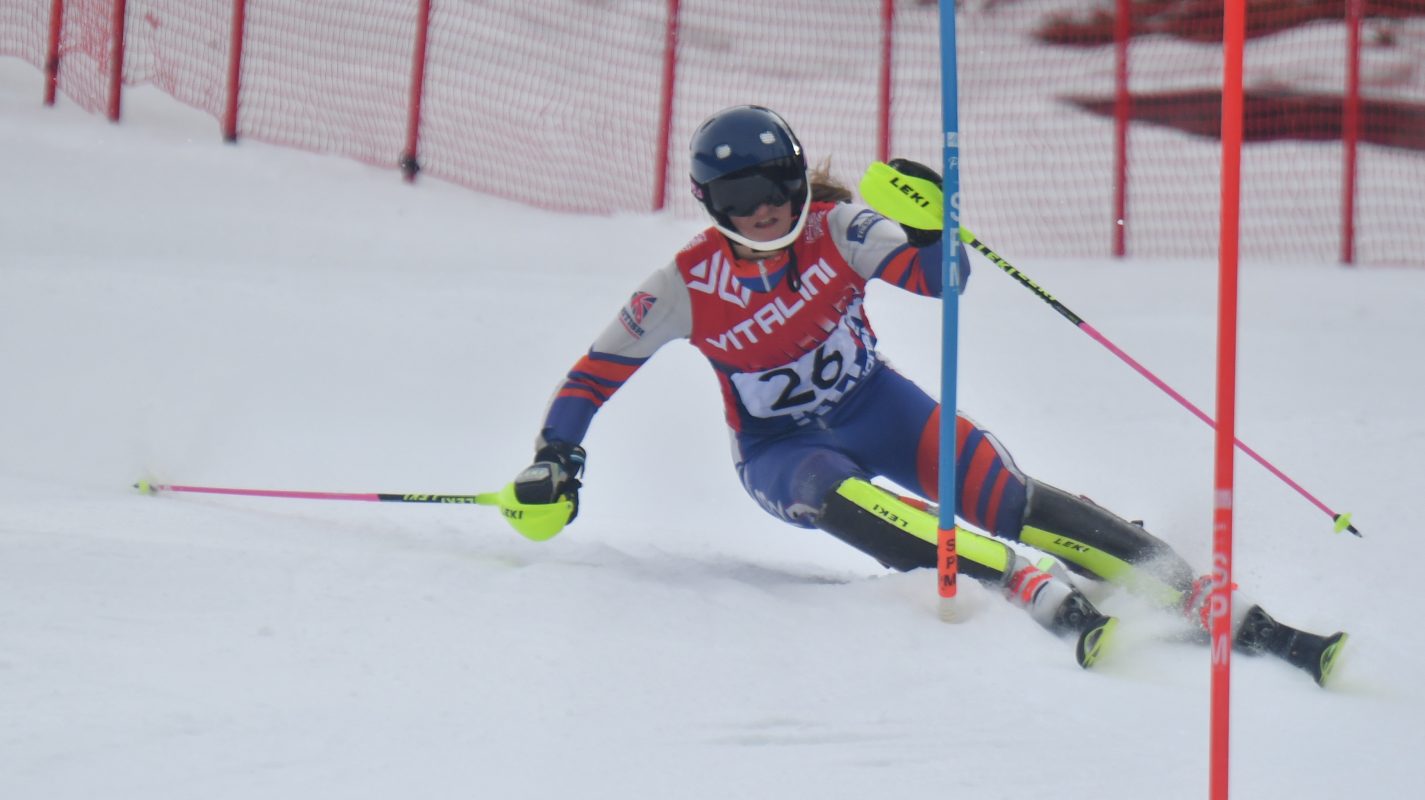 Today saw the action begin with the FIS Slalom on the Stelvio piste and U10/U12 GS races on the Stella Alpina piste, with both slopes in spring like condition with the warm weather.

In the FIS Slalom there some impressive skiing from Under 18 female racer Alexa Eliff (CDC) who was the fastest British and English racer clocking a time of 1.47.05. She was followed by Scottish racer Nicole Ritchie (GSR) who also topped the Senior podium in a time of 1.48.86. Third fastest British female racer was Under 18 athlete Sophie Foster (Ambition) who was third fastest Brit in a time of 1.49.55. She also took second spot in the Under 18 podium.  The top spot on the Under 21 podium went to Shannon Potter (Excel Ski Racing), who was also the fastest English Under 21 female athlete. Jasmine Butcher (Excel Ski Racing) was the fastest English senior female athlete. See podium standings below.

For the men, it was an Under 21 athlete who was the fastest British man in the two run race. Oliver Weeks (AMB) clocked an overall time of 1.40.11, followed by Under 18 athlete Diaco Abrishami (BSA) who finished in a time of 1.41.95 and who was also the fastest English Under 18 male skier. Third fastest overall and second fastest in the Under 18 category was Thomas Butterworth (EVO) who finished in an overall time of 1.42.82. The fastest Under 21 English male racer was Jake Doyle (AMB). See podium standings below.

Over on the Stella Alpina piste, Brooke Baxter (BSA) was the fastest Under 12 girl in a time of 41.60 with Lucy O’Connor (CDC) finishing in second with a fastest run of 41.81 and Catherine Murray (EVO) was third, clocking up a time of 41.91. Fourth was Lucy Howeson (EVO) and fifth was Isabel Nowell (Lions). For the Under 10 girls, Lowri Howie (EVO) had the fastest time of 42.99, with Jessica Freear (SPR) finishing second in a fastest time of 43.84 and Jessy Bosch in third with 46.30. Fourth was Neave Masters and fifth was Isla Cameron (BSC).

For the Under 12 boys, Hamish Blyth (Apex) was first with the quickest time of 38.98, Luca Westbrook (BSA) was second in 39.58 and Jacob Dawson (Kandahar) was third in a time of 41.07. Matthew Butler (BSA) was fourth and Ryan Faber (AMB) was fifth. For the Under 10 boys, standing on the top of the podium was Lorcan Morrison (GSR) in a time of 42.20, George Smith was second with a fastest time of 44.48 and Rufus Wontner (Kandahar) finished third in 44.54. Craig Menzies (AMB) was fourth and Aaron McDonald (GSR) was fifth.