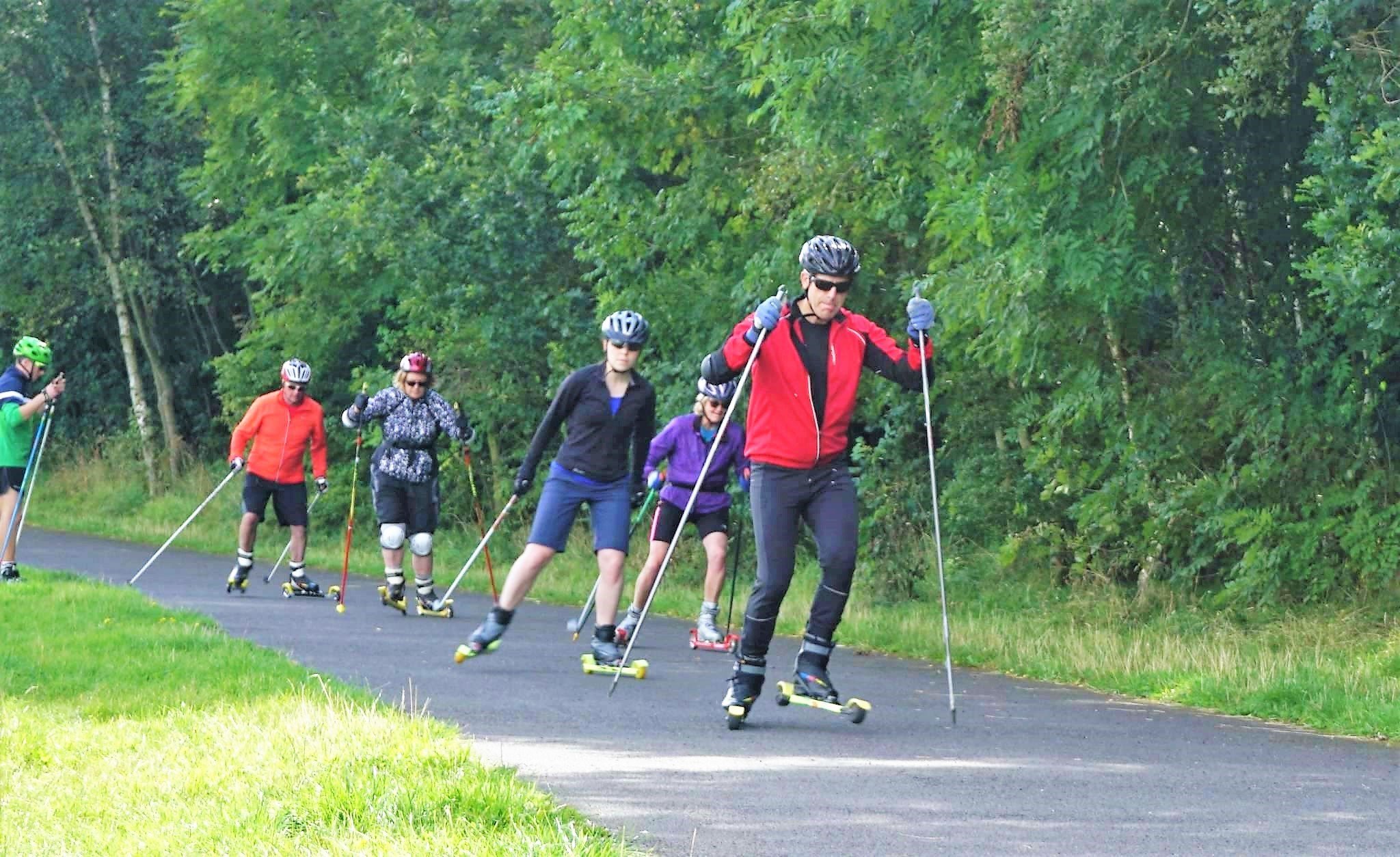 Nordic skiing is the term often used for a collection of disciplines. The most common of these that take place in England are Roller Skiing and Cross-Country Skiing but also include disciplines like Biathlon and Ski Jumping.

The snowy outdoors provide the perfect playground for cross-country skiing, the all-terrain snowsport that you do at your own pace. The lightweight equipment provides an excellent way to get outside and continue exploring during winter months. Little snow is required to wind through woodland, stomp over hillsides or skirt around golf courses. Many of our clubs arrange trips away to more snowier climbs when there isn’t much snow available in this country. The non-competitive side can happen whenever and wherever there is snow enough to ski on, with tracks prepared in many resorts and off-track skiing happening anywhere, including, occasionally in England.

A further branch is biathlon (skiing and shooting). Nordic skiing has a competitive side, with, at elite level, the FIS Nordic World Ski Championships being a major event, taking place every second odd-number year between the Winter Olympics. At lower level come mass-participant, long-distance races (loppets) and a wide variety of less-formal races.

Meanwhile, cross-country ski racing is often touted as one of the most physically demanding competitive sports and renowned as winter cross-training for triathletes, runners and rowers.

For those new to roller skiing, several of  our clubs practice in traffic free environments like cycle tracks or parks. For more advanced skiers heading out onto local roads, some useful road safety guidance is available on Fasterskier.com:  https://fasterskier.com/fsarticle/rollerski-safety-best-practices/.

Snowsport England run events for those wanting to try roller skiing for the first time and for more experience skiers looking for a bit of coaching or to ski as part of a group. Visit our events calendar for more information or contact us at nordic@snowsportengland.org.uk

There are two techniques used for cross-country skiing; Classic and Skate. As a cross-country ski technique, skating is actually comparatively young, first being used in the 1980s. Classic, on the other hand, has been included in the Olympics since 1924. Classic technique is comparable to running with alternate arms and legs propelling the skier forward up a twin-cut spur. Skate technique is more akin to ice-skating, roller blading and speed skating with power from the legs being generated by a side-to-side motion on wide, smooth trails.

After the Seefield 1985 World Championship, where all the medals were won utilising skate, classic and skate were separated and defined as separate techniques. Specific equipment has since been developed for each technique.

For both classic and skate, boots attach to the ski binding at the toe only, allowing a wide-range of motion and free heel. The equipment for both techniques is also lightweight – especially in comparison to alpine ski equipment.

Classic skis tend to be slightly longer and cambered so that the central section makes contact with the snow when the skier kicks down on the ski. Forward propulsion is generated by the ski gripping the snow, which can be achieved through a variety of different technologies such as fishscales (notching in the base), hairiesor zeros (fibrous hairs on the base) or wax (sticky tub wax corked onto the base). The poles are slightly shorter, coming up to the skier’s armpits and the boots have minimal ankle support and are very flexible at the toe.  Classic roller skis have a ratchetted front wheel to prevent the ski rolling backwards and providing the grip equivalent to the central section of a ski.

Most Telemark Skiers come to Telemark from the Alpine side of the sport ,but before there was Alpine skiing there was Telemark. It is the oldest turn there is. Skiing’s a thousand years old and until fairly recently it was all about getting around in winter. The standard way of fixing your boots to the ski was the use of birch tree roots.

The Telemark turn was invented in the 19th century by a Norwegian called Sondre Norheim who lived in the Telemark region of Norway, hence the name of the turn. Sondre discovered that the Telemark turn was the best way to turn these old wooden skis when going downhill. Perhaps it’s just coincidence that Sondre Norheim died and is buried
in the USA but we have the Americans to thank for rediscovering him and for re-inventing the Telemark turn in the 1980’s. Modern technology been applied to Telemark by the big manufacturers. The result over the last 40 years, has been technological leapfrog between skis, boots and bindings. As each element in turn got better it demanded ever-greater
improvements from the other two elements and of course from more skilful, adventurous, demanding and increasingly discerning Telemarkers. The latest gear now puts the fabulous Telemark turn within the reach of every skier.

Great Britain has one of the best Telemarkers in the world with more World Cup podiums that any other British skier. Watch Jasmin Taylor explaining why Telemarking is so liberating.