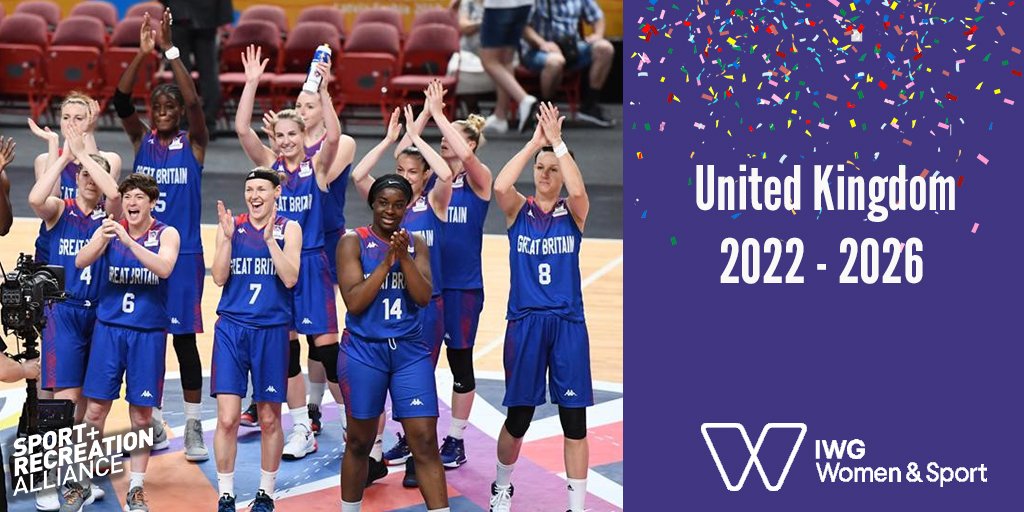 The United Kingdom has been announced as the next host secretariat for the International Working Group (IWG) on Women & Sport. Following a competitive bidding process, the UK will take over from current hosts New Zealand for the quadrennial period of 2022-2026, and it will include the staging of the 9th IWG World Conference on Women & Sport 2026.

The IWG works throughout the year to highlight important issues facing women and girls in sport and physical activity. It supports development, encourages inclusivity and shares knowledge across its global network to empower women and girls to take part in activity.

It partners and engages with world development and sporting agencies, including UN Women, UNESCO and the International Olympic Committee (IOC), to drive awareness and support positive change. Every four years it stages the world’s largest conference dedicated to gender equity and equality in sport and physical activity, attracting 1,200+ global experts to discuss strategy.

Annamarie Phelps CBE OLY, Chair of the UK Bid, said: “We are thrilled to have been given the honour of taking on the role of host secretariat for this prestigious group and will endeavour to build on the wonderful legacy already created by those nations who have held this position before, including our predecessors in New Zealand.

“Central to the UK’s bid was the pledge to ‘share’ and to learn from others through sharing. During our time as host secretariat, we will be inclusive of all cultures and identities; commit to mutual learning; and operate as global citizens with a collective responsibility to progress sport for women and girls in a way that is sustainable for the sport system and future generations.

“We look forward to welcoming the world and pushing forward conversations which challenge the status quo, re-evaluate and reinvent how sport works, and harness the power of sport as a driver for social change and social equity.”

The first ever international conference on women and sport was organised by the British Sports Council and was hosted in Brighton in 1994. The conference brought together policy and decision makers specifically to accelerate the redress of the imbalances women faced in their involvement in sport, in the UK and internationally. The IWG Brighton Declaration on Women & Sport, the world’s largest and oldest treaty dedicated to gender equity and equality in sport and physical activity, was a legacy from this gathering nearly 30 years ago.

Updated in 2014, the IWG Brighton plus Helsinki 2014 Declaration now has nearly 600 signatories – global organisations demonstrating their commitment to ensuring that women and girls can freely and safely participate, compete and build careers in sport and physical activity. Amongst them stand the International Olympic Committee (IOC), the International Paralympic Committee (IPC) and FIFA.

UK Sport CEO, Sally Munday OBE added: “It is an extremely proud moment for all of our partners – and everyone involved in sport across the UK – that we have been announced as the next host secretariat. As part of UK Sport’s new mission we want to drive increased collaboration and harness the power and platform of sporting success to drive change across wellbeing, diversity, inclusion and sustainability.

“Recent research that we have undertaken into female representation in international sports governance in particular has found that women continue to be significantly underrepresented and that a more nuanced approach may be needed to achieve greater progress toward gender equality.

“Through being the next host secretariat we want to explore those approaches, challenge the status quo, empower even more women and girls to take part in sport at any level and demonstrate what is possible. A brilliant legacy has been left by those hosts before us and we will embrace that and actively support, champion and drive reform in the international sporting system.”

The bid was co-ordinated by the Sport and Recreation Alliance and received the support of over 100 organisations in the physical activity sector including Sport England, sportscotland and Sport Wales.

Lisa Wainwright MBE, CEO of the Alliance, said: “The benefits of hosting the IWG will be profound. For the UK to become a true thought-leader in community sport, physical activity and volunteering, it needs to identify innovation, projects and best practice that are working and having real impact, whether in the UK or across the globe.

“In this role we will be able to proactively reach out to different parts of the world to identify and learn from what other nations are doing to support women and girls through community sport and recreation. The opportunity for the UK to serve as secretariat to the IWG will prove a major opportunity to be global leaders.

“I would like to place on record my sincere thanks to all of the stakeholders, ambassadors and partners who enabled us to submit a world-class bid, and we look forward to working with you all as we bring the IWG back to the UK in 2022 through to 2026.”