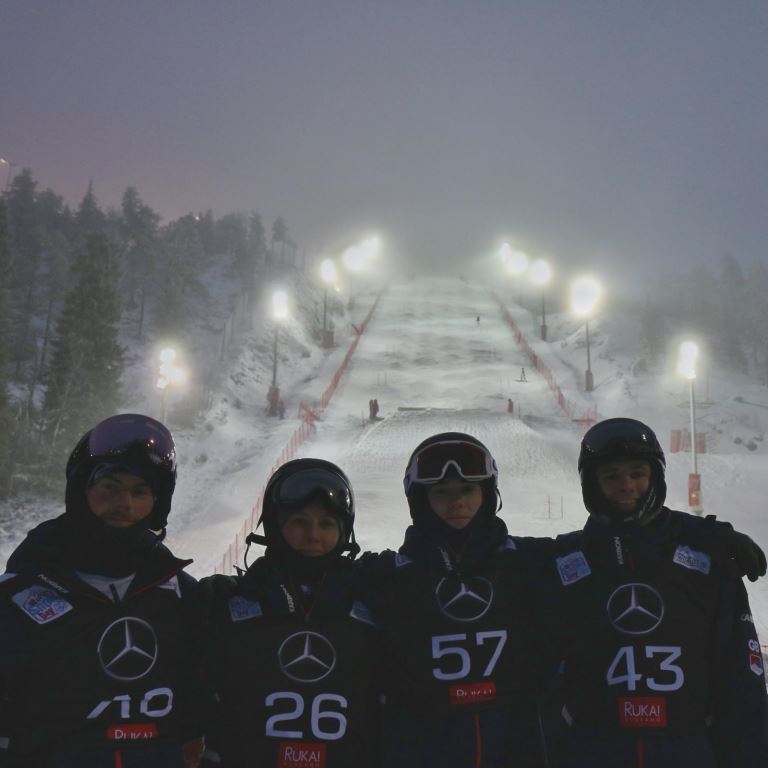 Four freestyle skiers and four alpine skiers will see World Cup action over the next three days along with GB Cross Country’s Andrew Musgrave who will be looking to carry some strong form through from last week’s impressive efforts in Lillehammer.

GB Moguls start their World Cup season in Finland on Friday with two pairs of siblings looking to bump and jump their way to success.

Makayla Gerken Schofield finished 32nd in the corresponding event last year which was also her World Cup debut and ended up being her best result at the top level in 2017/18. She finished the season with a Europa Cup podium and a top five finish at the World Junior Championships and is primed for a good start to this season.

Brother Thomas also made his first World Cup start at this event last year, and capped his season on a high with a pair of second place finishes at a Europa Cup event. He is joined in the men’s event by Max and Wil Willis.

Max returned to the World Cup circuit last year after two years away, scoring 25th place in Ruka and 21st in Calgary along with a pair of Europa Cup top tens. Younger brother Wil made a successful start to his senior career with a pair of FIS victories in February and he makes his World Cup debut on Friday.

Live scoring will be available via the FIS website and app with qualifications starting at 8:10am GMT. Friday’s finals will be broadcast on Eurosport Player from 2:20pm.

Four GB Alpine skiers take to a pair of World Cups in France and Switzerland this weekend.

On Saturday Charlie Raposo is set to start his second World Cup in as many weeks after travelling from Beaver Creek to Val d’Isere. The 22-year-old will be looking to make amends after posting a DNF last weekend when he takes to giant slalom qualifying on Saturday morning.

Sunday’s slalom will see Dave Ryding and Laurie Taylor hoping to build on some promising performances at the season-opening World Cup last month in Levi.

Ryding was 12th in Finland which happens to also be his best World Cup finish at Val d’Isere from four attempts. In contrast, 22-year-old Taylor is yet to compete at any level at the French resort and will be aiming to make the flip into the top 30 for the first time at World Cup level.

Also on Sunday, Alex Tilley will be in Switzerland for the World Cup parallel slalom event. The format will see all skiers go through qualifying with the top 32 moving into the head-to-head knockout competition. Tilley goes into St Moritz on the back of a 21st place at her last World Cup giant slalom start in Killington followed by a Europa Cup 11th in Sweden on Saturday.

** A number of Europa Cup squad skiers have been competing at the Far East Cup this week in China. From Tuesday’s and Wednesday’s slalom races, the best result went to Billy Major with an 11th place while Robert Poth was eighth in today’s giant slalom. There is one more giant slalom race still to come on Friday.

Andrew Musgrave will fly the British flag when the Cross Country World Cup rolls into Beitostølen on Saturday.

Following an impressive sixth place in the 15km free skate last week in Lillehammer, Musgrave is showing good form and is looking forward to a 30km free skate which presents exciting possibilities.

“I was completely unsure how my form was going to be going into Lillehammer,” said Musgrave. “Sixth place on Saturday gave me a big confidence boost and I know my form is good.

“I’m really looking forward to getting out and doing another skate race in Beitostølen on Saturday now. I know the track well and it suits me, plus I also like the longer 30km distance.

“At the moment it’s forecast to snow a fair bit, but I’m crossing my fingers and hoping it won’t; I like it best when the tracks are a bit faster and harder.

“No matter what the weather though I’m going to go out and give it everything I’ve got.”

Live timing of Saturday’s men’s 30km free will be available via the FIS website and app from 11:15am GMT. The race will be broadcast live on Eurosport Player and delayed on Eurosport 2 from 2:30pm.

A pair of GB Park+Pipe skiers put on an impressive showing in qualifying at yesterday’s US Grand Prix in the Copper halfpipe.

Zoe Atkin, 15, was competing in her first-ever World Cup but put in a nerveless display on her way to 15th place in a top-class field. Sam Ward, 18, sent down in a strong performance to place 14th in his heat, and 27th overall in what was only his second ever World Cup contest.

Next week, Izzy Atkin and James Woods will compete at the Dew Tour in Colorado alongside Para snowboarders Owen Pick and James Barnes-Miller.